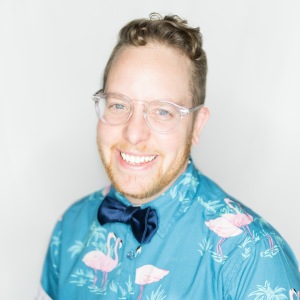 With a long history of working in community non-profits, & before that, as a youth advocate, James has combined their passion of education & advocacy together to create innovative trainings for K-12 schools, universities, & a wide array of agencies (from health providers to youth-serving ones).

You can check out their services page for additional info.

Aside from their work as a freelancer, James serves the Commonwealth of Massachusetts‘ Department of Children & Families as the Plans of Safe Care Coordinator for the Western Region. In this role, James provides support, training, and consultation to area office social workers & community based providers on issues related to substance exposed newborns & substance use.

Prior to that, James served the YWCA of Western Massachusetts as their Youth Project Director. In this role, James oversaw programming aimed at reducing instances of domestic violence, dating violence, sexual assault, & stalking experienced by young people in Springfield, MA.

Before moving to Massachusetts, James served as Director of Programs at the Pride Center of the Capital Region, the country’s oldest, continuously running LGBTQIA+ community center located in Albany, NY. James also worked as the agency’s Youth Program Manager, where they provided oversight for all youth services including trainings for K-12 schools, leadership development, & supportive services aimed at improving the lives of LGBTQIA+ youth.

In addition to this work, James also runs an LGBTQ+ seniors program through WestMass ElderCare; as well as facilitates groups for trans and nonbinary youth and their families/caregivers through Translate Gender.

James holds an MFA in Creative Writing from Queens College (2010) & a BA in English Literature & Gender Studies from Hunter College (2008). They previously served as Editor-In-Chief as well as Poetry Editor for Ozone Park Journal, a new journal of creative writing sponsored by Queens College. Their work has appeared in print & online journals including: Hematopoiesis Press, Up the River, Mud Luscious Press, The Scrambler, Women Studies Quarterly (through Feminist Press), AlexZine, Farmhouse Magazine & Next Door Magazine. James has also been featured in a non-fiction academic publication in Gender Diversity and LGBTQ Inclusion in K-12 Schools through Routledge Press (June 2018).

To drop James a friendly line, email is best (james@jamesshultis.com).

Check James out on LinkedIn too.